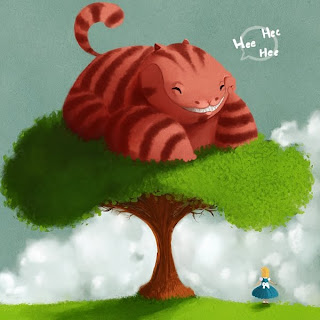 I'm particular fond of the little moustache thing he's got going on.

A little bit more. Having the worst time finding suitable colors. Pretty happy with the sketch so far, though :D 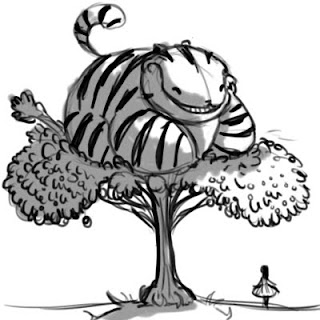 Hoping I'll find the time to finish it tomorrow. Been far too long since I've done this. Feeling good about it :D

Bobby Chiu is finally interviewing Kei Acedera and the challenge is to draw one's own version of the Cheshire Cat from Alice in Wonderland. Don't have as much time to work on it as I'd like, but I think I'll make it. Here's a wip: 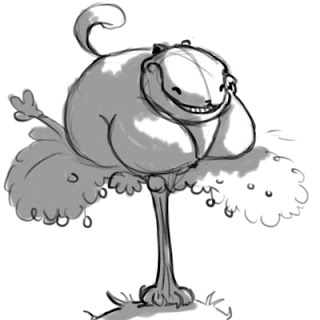 I thought it would be fun if he was really huge :D

Little over a week ago I saw an episode of Sherlock Holmes, starring Jeremy Brett, and I think that influenced my Sunday night sketching last week. Something about the fashion back then...I was trying out a new way of drawing, laying the pencil on its side - big dresses and done-up hair was just so easy to draw that way. 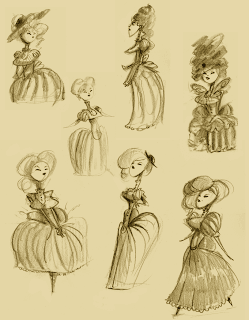 Lots of fun to do. Tried to get some real flow of lines into my drawing.

Email ThisBlogThis!Share to TwitterShare to FacebookShare to Pinterest
tags: sketch

Both paintings got done and are now hanging in the mess hall of the school. The place I chose to hang them is perfect for them, kinda dark with warm lighting - it's just a little hard to find them, perhaps. Pretty difficult decision, actually, but I thought that it was better to hang them where they looked good instead of where they were most visible. They want to be seen, and I'm sure they will be. Now, pictures:

Boris on the cliff, yearning for apples: 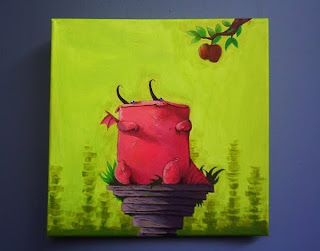 Grégor on the job: 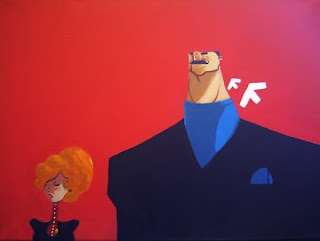 Email ThisBlogThis!Share to TwitterShare to FacebookShare to Pinterest
tags: painting 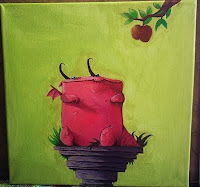 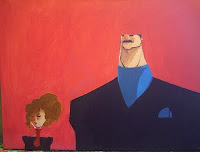 I really think the background color compliments the picture quite well. This isn't actually the finished version, though - I added some stone pillars in the distance.

The second picture is of my second painting - started today. Needs a little somethin' somethin', I think. Might work on it a bit tonight actually.

In other news: I ate broccoli for the first time today. Yay me!!

I would call this done, but the white background is bothering me - gotta sleep on it. 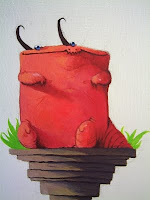 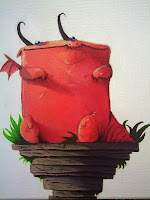 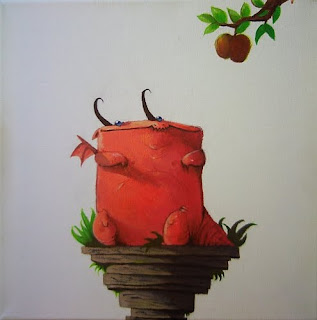 I'm calling it: "Boris on the cliff, yearning for apples"
posted by Jonas bm at 10:20 AM 0 comments

Special classes this week - I chose painting. We started out with some exercises yesterday, practicing color mixing and such.

The rest of the week, we'll be working on our own paintings, subject and method completely open. I went and did this little demon critter and an apple. Not quite done yet, but I'm liking it so far. 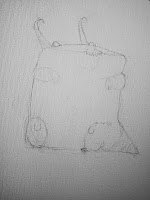 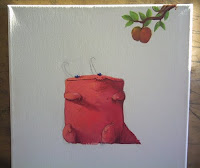 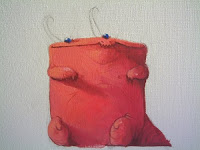 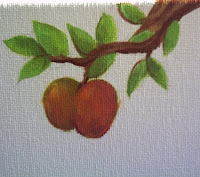 It's being done in acrylics on cotton canvas, which I've never tried before. Loving it so far :D

Okay, here's some photos of the finished packaging. The boxes were bought some time ago in Japan and we were given a template in Illustrator to work on, which was then printed out and 'glued' to the box using photo or spray mount. 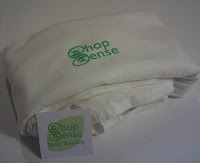 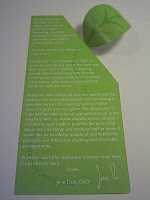 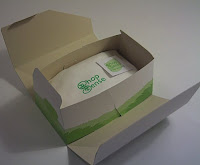 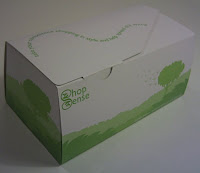 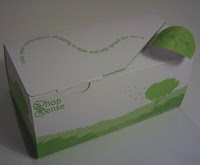 All in all, a lot of fun, though the pressure was certainly on - I finished with plenty of time to spare, though.

Next week is special - normal classes are put aside so that we may experience other things. I'll be doing painting for instance, which I'm looking forward to. The hall I live on will be helping out in the kitchen next week and I think it's gonna be tough on my spare time - we'll have to see.

Email ThisBlogThis!Share to TwitterShare to FacebookShare to Pinterest
tags: design

Been awfully busy these last few days, especially today, with the packaging project. I pretty much only stopped to eat and use the bathroom.

I've finished my box, but I don't have the stamina to sit and edit photos right now, so you'll see those later on.

Here's something I did yesterday, though. It's a concept for a thing I'm working on. It was supposed to be a chimney sweep, but looks more like a cowboy sweep to me.

Also, something funny: I posted a comic based on a poem earlier this week, Frog, and the author actually dropped and provided a much better translation, done by one David Keplinger. Scroll down and have a look.

Got a bit further with my project today and thought I'd post some pictures. 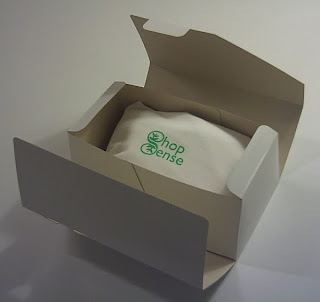 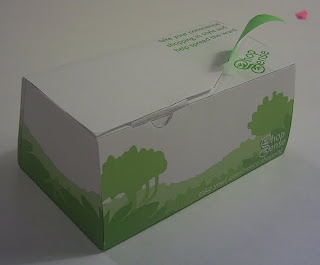 Printing on the t-shirt wasn't as complicated as I had feared, and it came out better than I had expected. With a logo that small, it could have been ruined quite easily, I think.

Now, in my last post I talked about how I love winter, so here's a picture of today's snowfall. 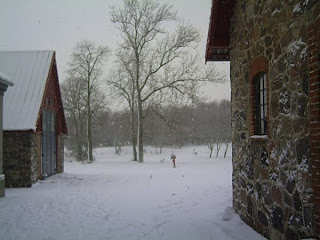 Saw a toilet at the side of the road yesterday, covered in snow and wrapped in lights. Went and made this just now really quickly.

This has been a good day :D

Email ThisBlogThis!Share to TwitterShare to FacebookShare to Pinterest
tags: speedpaint

Okay, hats off to anyone who gets it :D 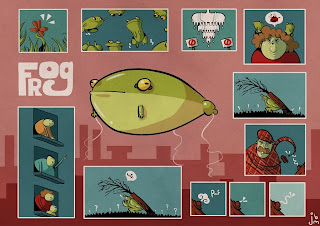 This was an attempt at illustrating a rather surreal piece of prose poetry, called "Frog", written by Carsten René Nielsen. It was in Danish, but here's a brief rundown of each panel:

- It would be spring.
- The frogs would jump around the livingrooms.
- Don't get too close to the chandelier.
- Don't sh** in aunty Mary Anne's hair.
- Outside, the beech is ready to be shot out.
- We see the farmer strike the match and light the fuse.
-
- The spark goes all the way to the bark.
-
- Nothing happens.
- We look silently out the windows and to the sky.
- A frog the size of a zeppelin is hovering over the city.

Really fun to work on. Kinda want to try out the same thing with a story that makes some sense :D

The author actually found this blogpost and provided a translation, done by David Keplinger:

Here’s how it would be: spring, the windows would be open, the frogs jumping around the living room. “Not so close to the chandelier, little friends, and don’t you shit in Auntie Marianne’s hair!” Outside, the beech tree is ready to take off. We watch the neighbor strike the match and light the fuse, which fizzles all the way to the trunk. But nothing happens. The tree stays where it is. In silence we behold it from the window under an almost transparent sun. In the sky, above the city downtown, floats a green frog as big as a zeppelin.

Jonas bm
Hi, my name is Jonas B. Mikkelsen and I'm a character animator from Denmark. I'm into most anything creative, including (but not limited to) drawing, painting, writing and game making. Animation is a given.